Yesterday I noticed the kerfuffle about the UK's Tower Bridge Twitter account. It's a bot that tweets when the Tower Bridge in London opens and closes.

In the author's announcement of the bot he said,

The idea of overhearing machines talking about what they’re doing is, to my mind, quite delightful.

and I tend to agree.

So I thought I'd look at setting something up locally. I live close to the flight path so while I was pondering this a plane flew over and I thought I'd set up a bot for the Sydney Airport.

They have listings of arrivals and departures so I hacked together a bot and this was the result: 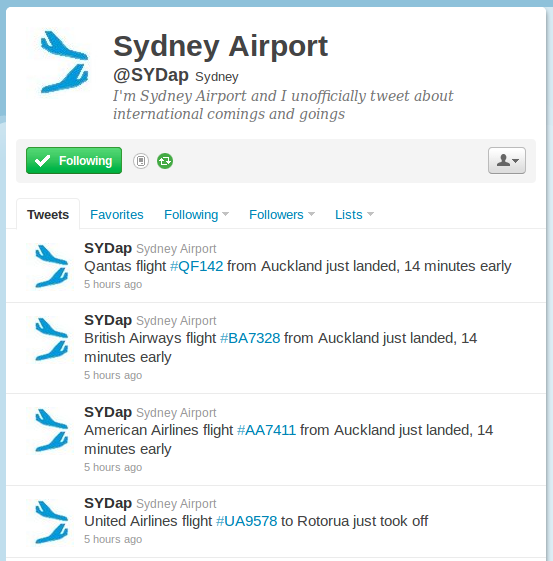 So why is this a failed experiment? Well after running it for a time I realised that the source data, scraped from the arrivals and departures page of the Sydney Airport site, didn't really match what I was trying to do with it.

The data is focused on providing information to passengers, not an accurate picture of what really is coming and going from the airport.

The lesson? Data can't always be hacked to suit other purposes and if it's the foundation of a project, as it so often is, then spend the time ensuring it matches up with what you're trying to do.

That said, I don't consider this a waste of time. Failure's part of the process.

These are imported from this site's old blogging software and are kept for archival reasons.

Wow, if we could have a schedule of flight path nasties overlayed with our TV guide and anticipate when we would miss that crucial dialogue … now that would be something!

have you seen flightaware.com they have some interesting feeds…

Thanks Silona, I hadn’t seen that site. They have heaps of information.