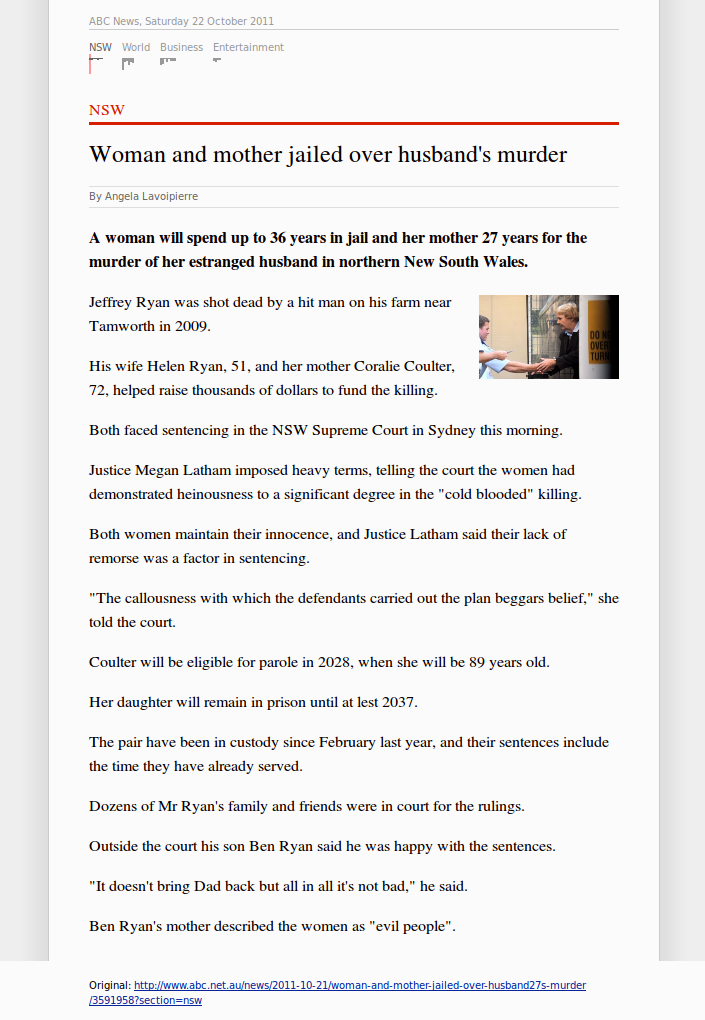 tl;dr I made an Australian version of Phil Gyford's Today's Guardian because I was fed up with Australian online news. I'm not sure it solves my problem but I'm interested to hear what you think of Daily Paper and online news in general.

To get my regular news many years ago I used to visit SMH.com.au every few hours and see what was happening in the world. This worked well for a number of years until SMH started to dramatically decline in quality compared to the print version of the Sydney Morning Herald. This decline appears to have been driven by the analytics that Fairfax was getting on news stories based on more bored office workers reading salacious stories instead what I'd consider more useful journalism (some top stories on the SMH front page as I write this are "Suds to the blokes" and "France's femme fatale").

As my use of RSS grew, I sought out a different approach to getting my news and set up hand-picked RSS feeds from the ABC. Once again this worked well for a few years until a couple of months ago the ABC updated their RSS feeds and inexplicably changed all of the URLs to the RSS feeds from nice "/news/sydney.rss" to "/news/feed/10232/rss.xml" without providing redirects. This meant I would've had to go through and update each of my feeds manually which was not a huge task but gave me pause for thought.

It was around this time that my girlfriend decided to switch off from news completely. She was sick of the fact that in Australia our "national debate" has seemed to be fixed on the same issues rehashed over and over and over for the last few years (think refugees, climate change, etc.), which got me thinking how I was consuming news.

As my feeds contained every single story for a particular topic or geographic region it was quite a firehose of news items and a lot to get through. Being a feed, I'd be constantly be seeing new items flow in and the temptation was to sit there reading until I'd read each item I was interested in, by which time there'd often be even more stories that had flowed into the feed.

This didn't feel right - it felt like the news was consuming me, rather than me consuming the news.

A couple of weeks before all of this had happened I'd come across Phil Gyford's Today's Guardian, which he wrote to address some specific shortcomings he'd identified with online news - Friction, Readability and Finishability. Take some time to read his post and understand Phil's motivations.

For me the idea of finishability was really appealing as I was sick of the firehose of information. I didn't want every news story, I wanted the best news stories and when I'd read them I wanted to know I could switch off.

This all lead to me porting Phil's code to work with the ABC here in Australia and you can check out the result that gets updated each day at 08:00:

I've had it running for a couple of weeks now and whilst I tried to use it for the first week or so I'm not finding it fitting in with my routine so I never get around to checking it. The funny thing is I don't feel any less informed and I seem to be just as aware of the day's events as the next person. My currently theory behind this is that other channels must be doing a good enough job at getting news in front of me - things like Twitter or links that friends send me directly over IM or email.

I'm not sure what to make of this all but I'd be very interested to hear how you're using online news and if something like Phil's daily paper would help you.